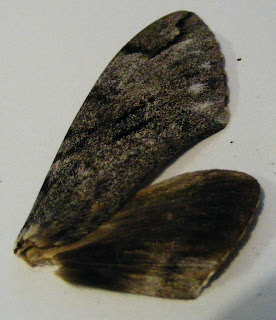 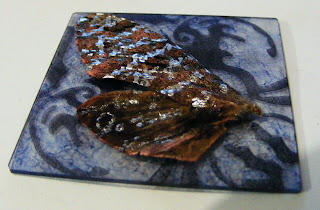 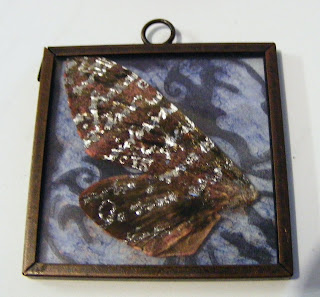 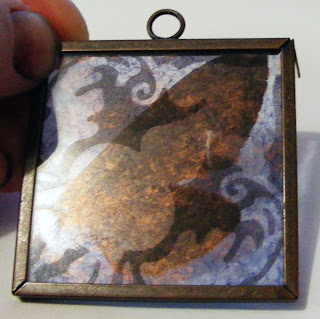 I found a large moth, laying on our front door mat and touched it to see if it was alive, it didn't move, I have long been amazed by the wings of butterflies and moths and have often thought of using critter wings in my art...was this creature offering itself to me as an embellishment?....surely not....my 4 year old wanted to touch it and asked why it didn't fly away, I told him that it was because it was very cold outside and that it was not able to find somewhere warm, so it had slept on our mat, waiting for somebody to bring it in to be warm.
JD decided that he would do that and asked for a little bed to be made, we found a container and lined it with tissues, the lifeless moth was gently placed in it and covered with another tissue. Days went by and JD was disappointed to see the moth was not ready to fly around and so I had to explain "Moth Heaven" to him, he cried and told the moth who he had affectionately named JD-Fly, that he loved him.

We placed the moth on the window sill in the kitchen where it stayed for weeks...that was until JD decided he would play with it...picture a large dried up moth sitting on a toy train, chugging along the tracks.

After a day or too of the train rides my darling son decided that as JD-Fly was no longer in need of his wings that he would remove them....and so I got to salvage them for my art and JD-Fly got to have a proper burial.


yes that is embossing on the wings
Created & Posted by Linda B at 11:02 pm

Beautiful delicate work - do you think it will last, are you going to put it in a case and seal it?

Oh my goodness.. Only you would have thought of this..
pretty amazing Missus!!! well done .. and very special

I loved your JD-fly story Linda! I think you've given the moth a fitting end ..
~xx Barb xx~

Fabulous art - not that is what I call recycling

Beautiful and a family treasure

rofl!!! The bit about the moth riding around on toy trains will make me chuckle all day!

Not sure I could have touched it, but I really LOVE what you did with it - really stunning!

West Australian mixed media/experimental artist. I live with ADHD...this doesn't make me special, it's just a small part of who I am. To enquire about my projects or classes email me at atclindab@yahoo.com.au..........I am available for retreats, shows, private classes and commission work

Well Worth a Visit

Shopping for the Creative Soul